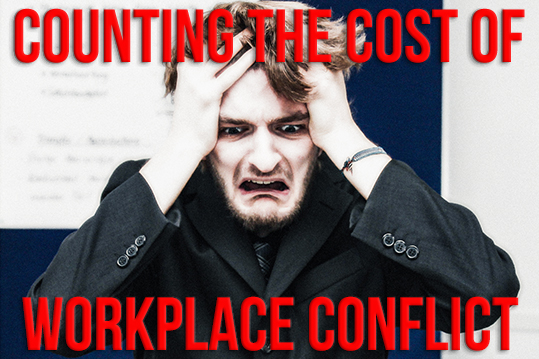 The key statistics are truly attention-grabbing. The overall cost of conflict to UK organisations is estimated to be almost £30 billion. When averaged across the whole workforce, that amounts to more than £1,000 per employee. The figures show that almost 10 million people experienced some form of conflict at work. More than 50% of workers reported suffering stress, anxiety or depression related to workplace conflict and almost 900,000 have taken time off work because of conflict and nearly 500,000 people resigned.

The lack of a general culture in which conflict is managed appropriately is also apparent from the research. Approximately 20% of employees report taking no action at all in response to the conflict in which they have become involved. Only about 25% of employees discuss the issue with the other person(s) involved in the conflict. Just over 50% of employees raise the workplace conflict issue with their manager, HR or their union representative. The average costs of conflict where employees did not engage with their managers, HR or union representatives were higher than where such discussions took place. Moreover, where conflict spiralled into more formal procedures, costs were more than 3 times the costs associated with informal resolution.

Anyone who takes a close interest in workplace conflict understands the importance of acting early to deal with workplace conflict. The benefits of acting early are not limited to saving substantial direct cost. Resolving conflicts quickly and effectively brings with it a raft of other benefits such as improved wellbeing and staff morale, better engagement, better staff retention, improved productivity and ultimately improved profitability. The creation of a workplace environment where people feel able to raise issues and feel heard can also lead to process improvements and innovation

The research reveals that although almost three-quarters (74%) of all employees who participated in workplace mediation reported that their conflict had been wholly or largely resolved, mediation is significantly underused. Only about 5% of employees reported having taken part in some form of workplace mediation, whether internally or externally provided.

The impact of Covid-19 and the disruption it has already caused to the workplace as well as the uncertainty and further upheaval that is likely to result as we navigate our way towards the ‘new normal’, is likely to lead to situations where existing workplace conflicts will be exacerbated or new areas of conflict will arise.

There are a number of key issues which we have identified from this report:

A few years ago, we published an article on the unassailable business case for workplace mediation which suggested that cutting the cost of workplace conflict by increasing the use of workplace mediation was possibly the ripest area for cutting overhead costs related to labour. That suggestion seems to be borne out very strongly by this latest report and the research upon which it is based.